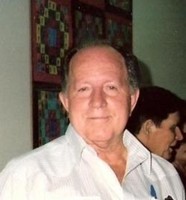 William Earl "Bill" Harris, 92, passed away on Sunday, April 20, 2014 in Jacksonville, Texas. William was born on February 6, 1922 to Robert and Hattie Harris in Midlothian, Texas

Bill served his country with honor and distinction in the United States Navy during World War II. Bill would later work as an independent contractor for the Dallas Morning News for 36 years. Bill had many interests in his life, but his greatest joy was spending time with his family and friends. He loved sitting and talking to his children and grandchildren. His open heart, infectious smile and mischievous sense of humor made Bill loved by all. He will truly be missed.

A gathering of family and friends will be held on Thursday, April 24, 2014 at 10:00 a.m. at Goggans Funeral Home followed by a memorial service at 12:00 p.m. Interment will be at Dallas-Fort Worth National Cemetery in Grand Prairie, Texas at a later date.

In lieu of flowers, the family requests that donations be made in Bill's name to the American Legion Post 517 in West Tawakoni, Texas or the Gideon Bible Society.

To order memorial trees or send flowers to the family in memory of William Harris, please visit our flower store.