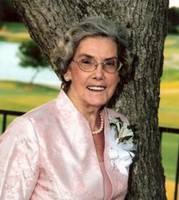 Wanda Lee McGinnis of Terrell passed away on March 17, 2014 from natural causes. Wanda, born April 26, 1922, in Fort Worth, was the daughter of Clarence and Ethel Wilson Spradley. She was preceded in death by her husband, H. L. McGinnis, Jr., her parents and her siblings Gloria Spradley Lambeth and Kenneth Spradley and is survived by her sibling Margie Houlihan of Fort Worth, Patsy Murphy of Fort Worth, and Don and wife Imogene Spradley of Grapevine.

Wanda, who graduated from Terrell High School in 1940, was married to H. L. May 23, 1942, in the First Christian Church of Terrell. She enriched her life along with all those she knew as a member of First United Methodist Church of Terrell, the Terrell Garden Club, the Terrell Book Review, the Red Hatters, a canasta player for over 50 years with many lifelong friends, a volunteer of the Terrell State Hospital, an inaugural volunteer of many years for the March of Dimes, and as a genuinely active participant in her sons lives.

Her service will be held Thursday, March 20, 2014 at Goggans Funeral Home in Terrell at 10:00 a.m. and Wandas body will be laid to rest next to her husband of 58 years in Oakland Memorial Park in Terrell, but her spirit and love will live in our hearts forever. A time of visitation will be held from 6:00 to 8:00 p.m. on Wednesday, March 19, 2014 also at the funeral home.

In lieu of flowers, Wanda has asked that you please make you show of love and remembrance a donation to the First United Methodist Church of Terrell or one to the Grounds Fund of Oakland Memorial Park of Terrell.
To order memorial trees or send flowers to the family in memory of Wanda McGinnis, please visit our flower store.