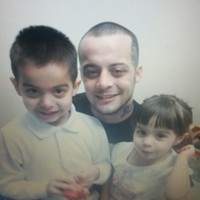 Seth McFadden, 27, passed away at his home in Terrell on Friday, November 7, 2015. Seth was born on October 24, 1988 to Matthew and Felisha McFadden in Mesquite, Texas. He worked as a landscaper for Weaves Tree Trimming Service. Seth was one of those truly compassionate spirits who loved life. He loved his friends and his family - especially his children, Breyden and Audrina. Seth was a prankster who loved to make people laugh. His bright smile and infectious laugh that will truly be missed by all who knew and loved him. Seth is preceded in death by his brother, Michael G. Brittain; uncles, John and William McFadden; grandmother Margaret Murphy; grandfathers, David McFadden and Gerald Peppers; great-grandfathers, John Mackle and Floyd Streeter; great-grandmothers, Cathy Mackle and Betty Slaughter. Those left to cherish his memory include his son, Breyden McFadden; daughter, Audrina McFadden; mother, Felisha Peppers; father, Matthew McFadden; brothers and sisters, Maxine McFadden, Carlie McFadden, Willow McFadden, Morgan McBee and her husband Chase, and Blake Bird; grandmother, Frances Peppers; fiancée, Reychel Bargas; as well, numerous extended family, friends and neighbors. A gathering of family and friends will be held on Friday, November 13, 2015 from 6:00 to 8:00 p.m. at Goggans Funeral Home. A celebration of Seth's life will be held the following day, Saturday, November 14, 2015 at 4:00 p.m. at the First Assembly of God of Mesquite located at 422 Ebrite in Mesquite, Texas.

To order memorial trees or send flowers to the family in memory of Seth McFadden, please visit our flower store.