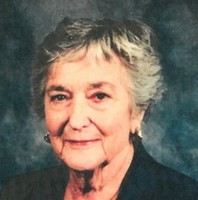 Sally Breeden LaRoe, 83, of Terrell, passed away on

side. Sally was born in Terrell, Texas to her parents

Sally found a friend in everyone and everyone found a

She was Terrell Tigers' head majorette and top tennis

inspiring everyone she coached. She graduated from

teacher. Sally instilled in her students a desire to

succeed and never give up.

Halloween was one of her favorite holidays. She dressed

up as the "wicked witch" and delighted children from

California to Terrell, Texas, and all knew her as the

popcorn ball lady... the house not to miss!

She met her sweet Johnny, and they were married 38

years. She is survived by John Thomas, her children

and his wife Joanne, 4 grandchildren, one great

grandchild and numerous nieces and nephews.

In lieu of flowers, the family request donations be

made to the Rockwall & Brin Church of Christ or

Funeral was at Rockwall & Brin Church of Christ
Church on October 17, 2017.

To order memorial trees or send flowers to the family in memory of Sally LaRoe, please visit our flower store.