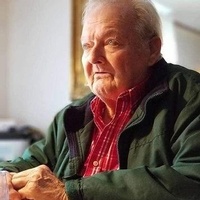 A Military Committal Service will be held on Tuesday, May 7, 2019 at the Dallas-Fort Worth National Cemetery at 2:00 p.m. with full military rites.

Pat was born in Orange, New Jersey to the late Anna Rose (Musano) O'Grady and John Joseph O'Grady on January 13, 1943, and the world was not quite ready for him. He had a brilliant mind even as a child, a mind that would never stop, which meant he would never stop. Spoiler Alert: he did that every day for the rest of his life as well.

As a young man, he joined the United States Navy. He was top of his class in "A" School and about to graduate when it was discovered he was color blind. Although he was not allowed to complete that particular "A" School, he did go on to enjoy other aspects the Navy offered, such as racing forklifts against other Sailors down the pier. Rumor has it a forklift once went AWOL over the pier into the water. This was a story he always enjoyed telling, and always got a laugh.

Life led Pat to California and then eventually on to Texas. While in California, he discovered how much he enjoyed the sport of boxing. He began to train for a period of time under Curtis Cokes, a World Welterweight Champion. It was rare that he would take time for anything he enjoyed, besides family. Typically, when he was not working, his time was full of working on his many "projects". Taking things apart, rebuilding and "Tim Taylor-ing" them with about 500% more power was a definite hobby of his.

He met the love of his life, and the woman he would spend the rest of his life with, Patricia, in 1989. She would teach him patience, if you can believe that, something nobody else has ever been able to do. They were married in 2003, and he loved her fiercely, even when he claimed she drove him crazy. We all knew better. He was obviously the one driving her (and most of us) crazy. They were the perfect match. Patricia's five daughters joined with his four, creating a big group of girls, each of whom he loved with his whole heart.

Pat lived his life as the family patriarch, working hard and working those around him even harder, mostly because we couldn't keep up. There were usually a ton of phone calls, diagrams, and craigslist ad suggestions involved. He had many skills and worked many trades, leading him to start his own businesses and meet many close friends along the way. He valued his friendships very much.