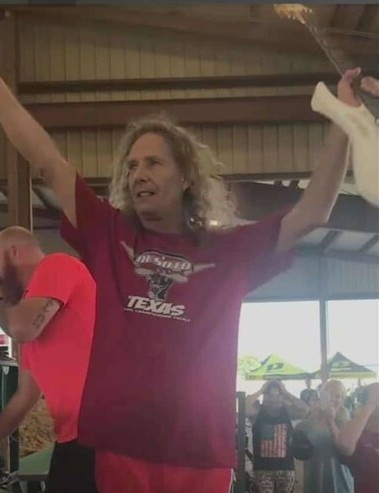 It is with heavy hearts that the family of Leland Hill announces his tragic passing. He died on August 25, 2021 at the age of 59. The world lost a beautiful soul, but heaven gained an angel.

Leland Hill was born in Mckinney, Texas to the parents of Tommy and Judith Hill on April 30, 1962. He graduated from Spruce High School in Dallas, Texas. Leland went on to build metal buildings for over 2 decades. In his later years, he did fire protection where he had the opportunity to have a flexible schedule and have more time with his family.

In 1993, Leland met his lifelong companion, Lonnie. He fell head over hills for her before they even formally met, when he saw the way she interacted with his young son, Chad. Leland knew the second he saw Lonnie that she would be the love of his life. She saved him from being Whataburger’s best customer. At the time, Leland was an amazing single father and he and Chad built a bond that would carry throughout life. Leland and Lonnie had a special kind of love that you do not see much these days. They were true best friends and had such a passion for one another. They expanded their family in 1998 and welcomed son, Zachary. Leland thought he was such a precious baby and called everyone to brag that he was as cute as the Gerber baby! Leland’s proudest moments were watching and coaching his boys in all of their sporting events. They will carry on his legacy. He was so proud of the wonderful young men they have become today. He also adored and spoiled his animals at home.

If you were looking for Leland, you could find him hanging out in his garage at any time. He had a free spirit and the kindest of hearts. Leland had a humorous personality and was extremely intelligent. He was referred to as “the ologist” by his close friends for his knowledge from extensive research of random facts. He was a one of a kind man who really appreciated the simple things in life. Anyone who knew Leland, loved Leland and he never met a stranger. He was always ready and willing to help others. He was genuinely compassionate when working with children. There was nothing he loved more than teaching the kids the “ins” and “outs” of BMX. Leland is well known as a legend for his talent at the BMX track. He did BMX for over 30 years and had the honor of being inducted into the BMX Hall of Fame. The thing he loved most about BMX was that everyone was a huge family, and no one was left out. Leland also enjoyed playing the guitar. He taught himself to play by standing in front of a mirror in his younger years. He would sit and play for hours and became an amazing guitarist.

Leland is preceded in death by his parents, Tommy and Judith Hill; his brother, Billy Hill; and his grandparents and great grandparents.

He is survived by his loving wife, Lonnie Kincaid-Hill; beloved sons, Chad and Zach Hill; brother, Tommy (Bubba) Hill; aunts, Linda Sullivan and Peggy Bostic; and numerous nieces and nephews who will miss him dearly.

The Hill family would like to specially thank everyone for the outpouring of support, love and prayers.

To order memorial trees or send flowers to the family in memory of Leland Hill, please visit our flower store.