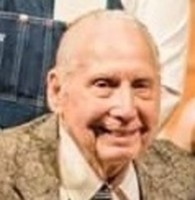 John had three brothers: William Howard Ballard (1920-2009), Marcelle Ross Ballard (1922-1927), and Dannie George Ballard (1926-1995). He started school in Seagoville, Texas and finished at W.H. Adamson High in Dallas. He was in the R.O.T.C. He also ran track, coming in second om state in 1942. He was sent to San Antonio to Radio School before entering the service during WWII. He served in the Army Signal Core, putting up telephone poles and stretching wire for communication across the Himalayan Mountains, starting in Calcutta, and going across and into China. He hurt his back while lifting a 300 pound roll of wire.

After the service, he married his pen pal from Brooklyn, NY, and lived on Long Island for 32 years. To this marriage, he had two daughters and one son. He got a divorce and returned to Texas in 1982. In 1985, he met his second wife, Marline Hill Fox. They were married on February 22, 1986, in Seagoville, Texas. They lived outside of Terrell, in Kaufman County for the rest of his life.

He belonged to the Terrell Bowling League and bowled until May 2017. He got his amateur radio license in 1957, then after coming back to Texas, he helped start the Trinity Valley Amateur Radio Club, where he remained an active member.

In 2004, he became a Kaufman County Master Gardener, which he dearly loved. He played his harmonica with a "Pickin & Grinnin" group in Kaufman and Terrell, which he greatly enjoyed doing. He and his wife delivered Meals on Wheels in Terrell every Thursday for 27 years. He is a member of the Gray's Prairie Baptist Church.

To order memorial trees or send flowers to the family in memory of John Ballard, please visit our flower store.