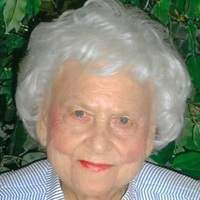 Imogene Doles Neal of Garland, Texas passed away October 7, 2019 at the age of 94. She was born in Wilson, Oklahoma on August 16, 1925, the daughter of Edward Doles and Lora Utz Doles.

She married Ira Clifford Neal on January 20, 1950 in Oklahoma City, Oklahoma. They moved to San Diego, California where he was stationed in the U.S. Navy. They raised two children, Loretta and Robert, after moving back to Dallas, Texas.

Imogene was a homemaker and an active member of First Baptist Church of Terrell Texas. She enjoyed traveling, crocheting blankets for nursing home residents and for newborns, and playing bridge and other table games with some very special friends. While she was highly competitive, she was also known for her quick wit and for her kind and compassionate spirit.

Imogene was preceded in death by her husband of 42 years, her parents, brother, Edward Doles and sister Mary Poorbaugh.
A special thank you is extended to Haydee Garcia, Maria Ontiveros, and Your Health Team for the excellent care they provided during her illness.

The family suggests memorial donations be made to First Baptist Church of Terrell or the S.P.C.A. of Texas.