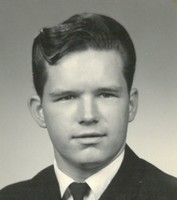 Howard Dale Martin of Palestine, Henderson and Terrell, Texas passed away August 31, 2016 in a Tyler hospital after a lengthy illness. Funeral services will be held on Monday, September 5, 2016 arrangements by Goggans Funeral Home & Chapel at 1911 N. Frances Street in Terrell, Texas. Visitation will be held at 11:00 a.m. with funeral services to follow at 1:00 p.m. Burial service will follow at Weaver Cemetery.

Dale was born June 7, 1948 in Terrell, Texas and a 1966 graduate of Terrell High. In 1975 he received his Bachelor's Degree in Forestry and Animal Husbandry from Stephen F. Austin University. Dale was an army veteran and retired after 25 years form the U.S. Postal Service as a letter carrier in Henderson, Texas. One of his favorite hang-outs was Herschel's in Henderson where he enjoyed daily coffee and visiting with local friends. He enjoyed all outdoor activities including hunting, fishing, camping, riding his Harley, 4-wheeling, water-skiing, roller skating and traveling on family vacations across the U.S. Dale was a true man with his greatest joys being with his children and grandchildren
To order memorial trees or send flowers to the family in memory of Howard Martin, please visit our flower store.