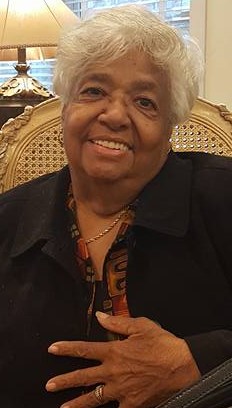 Gladys Inez (Coleman) Cobb, was born in Philadelphia,
Pennsylvania. She passed away peacefully on May 24, 2021 in Texas, at the age of 86.
Throughout her full life, Gladys was a caring wife, mother, grandmother, great-grandmother,
sister, aunt and friend.

Gladys was raised in the Roman Catholic faith; in her later years, she attended Grandbury
Presbyterian Church in Detroit, MI, pastored by Arthur C. (AC) Canada,

After graduating high school, Gladys followed her passion to travel. She visited most of the
United States and many international destinations, but was always a “Philly Girl” at heart. She
settled in Detroit, MI, where she lived for 46 years. In Michigan, her occupations included
Bookkeeper and Private Detective. She made many friends in Detroit through her numerous
business affiliations which included Amway and Lia Sophia. She retired a member in
good-standing of St. Theresa, Chapter 49 of the Eastern Stars. In Gladys’ later years, she spent
time with her son, James A Clough III and her daughter, Andrea Hunter, traveling between
Texas and North Carolina.

Gladys was an avid sports fan. If there was a football or basketball game on, she was front and
center! She downloaded and completed her March Madness Bracket faithfully each year.

Her family honored her wishes to not have a funeral service and to be cremated shortly after her
passing.

To order memorial trees or send flowers to the family in memory of Gladys Cobb, please visit our flower store.