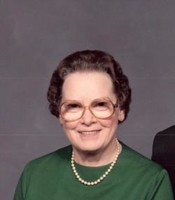 Gladys would meet Ellis Carver in high school. Gladys and Ellis would meet again while attending Draughton Business College where Gladys took an Associates degree in Business. They would marry on December 31, 1940 in Dallas, Texas. Gladys would work as an executive assistant for over 30 years. She would work for John E. Mitchell for twenty years before retiring.

A gathering of family and friends will be held on Monday, April 28, 2014 from 6:00 to 8:00 p.m. at the funeral home. A graveside service will be held the following day, April 29, 2014 at Grove Hill Cemetery in Dallas, Texas.
To order memorial trees or send flowers to the family in memory of Gladys Carver, please visit our flower store.