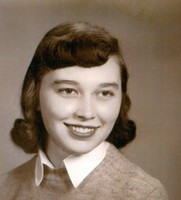 Gay Ann Withrow Sykes, 75, of Terrell, Texas passed away Monday, February 27, 2017, in Terrell. Gay was born July 12, 1941 in Wichita, Kansas to Earl and Gladys (Corby) Withrow. She was raised in Nickerson, Kansas. She worked as a Secretary and Librarian in California and Kansas. Gay enjoyed working with kids and started children's church at St Johns Baptist Church in Oceanside, California. Gay moved back to Nickerson, Kansas in 1998. She was an active member in Mitchell Chapel Baptist Church in Nickerson, Kansas.

Gay leaves behind to cherish her memory, 2 daughters; Kimberley Griffin and husband Marcellus, and Karla Williams and husband Reginald.

To order memorial trees or send flowers to the family in memory of Gay Sykes, please visit our flower store.