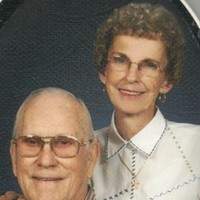 Edward T. Lynch, of Terrell, Texas, passed away on October 27, 2017, in Greenville, Texas. He was born to Edward Theophilus Lynch Sr. and Flossie Marie (May) Lynch on August 6, 1925. On December 21, 1946, Edward married Valla Jean Morgan in Dallas, Texas. They spent their lives together for 68 years.

Edward graduated from Greenville High School. After graduating, he started working for the Railroad, from which he retired 42 years later. He was extremely proud to have worked for only one company his entire life. Edward worked in Dallas, Fort Worth, and Houston. He retired from the Union Pacific Railroad, and in 1987 moved to Terrell, Texas. After retirement, he worked for McGinty's Hardware.

The family will be receiving friends at Goggans Funeral Home on Monday, October 30, 2017, from 6 PM until 8 PM. A funeral service will be held at the First United Methodist Church in Terrell on Tuesday, October 31, 2017, at 1 PM. Burial will take place at Memoryland Memorial Park in Greenville, Texas, immediately following the service.

To order memorial trees or send flowers to the family in memory of Edward Lynch, please visit our flower store.