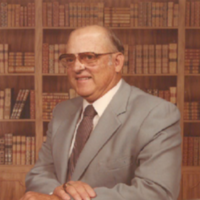 
Earl was born to Earl Lee Bradshaw Sr. and Billie Gott-Bradshaw on August 13, 1923, in Tulsa, OK. He was raised in Slaton, TX, and after graduating High School, entered the United States Navy Seabees, where he served his country from 1943 until 1946.


Earl attended college at Texas Tech, SMU, and University of Dallas receiving his Masters of Science in Industrial Administration. He worked 35 years as the Materials Manager for Sun Oil Co. and retired in 1983, where he later became the Mayor of Oak Ridge. Earl has been a life-time member of Veterans of Foreign War, Commander of VFW Post 2449 from 1997-2005, a member of the American Legion, and an active member in completing the WWII Memorial in Kaufman, TX. He has also been a member of Lake Shore Church of Rockwall for over 10 years.


Earl's greatest pleasures in life were fishing, bowling, hunting and, most of all, spending time with his family.


He is preceded in death by his parents, and brothers Mike Bradshaw, Gary McMinn, and Edwin McMinn.

To order memorial trees or send flowers to the family in memory of Earl Bradshaw, please visit our flower store.