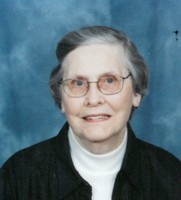 Dorothy Marie Darst Newburn, age 89 of Terrell, died peacefully at her home on Sunday, November 15, 2015. Dorothy was born in Terrell on March 19, 1926, the daughter of Joseph Levi Darst and Josie Gibson Darst. She was raised in Terrell and graduated from Terrell High School. Dorothy married A. L. Newburn on August 23, 1952, and they made their home in Terrell, where they raised their daughter and son.

Dorothy was a loving mother and homemaker, and had many interests, the most important her family and friends, and especially her church, St. John the Apostle Catholic Church in Terrell, where she was an active life-long member.

Dorothy was preceded in death by her parents, her husband A. L. on November 21, 2000, her brothers Wallace Darst and Fred Darst, her sister Mildred Darst Caughran, and two infant brothers.

Special thanks to Dr. Paul R. Cary, the staff at American Home Care, and the dedicated private in-home caregivers.

A gathering of family and friends will be held on Thursday, November 19, from 6:00 and 8:00 pm, with a Rosary at 7:00 pm at Goggans Funeral Home. A funeral Mass will be held the following day, Friday, November 20, 2015 at 11:00 a.m. at St. John the Apostle Catholic Church. The interment will immediately follow the service at Oakland Memorial Park in Terrell. Fr James Orosco will officiate. Pallbearers will be Jackie Pullen, William Sanders, Gilbert Arteaga, Randy Hamilton, Rocky Miracle, and Ross Miracle. Honorary pall bearers include Gordon Landwermeyer, Jerry Gibson, James Crouch, and Jimmy Carnes.

To order memorial trees or send flowers to the family in memory of Dorothy Newburn, please visit our flower store.