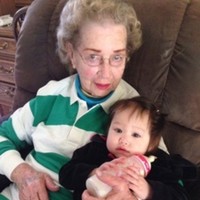 Dorothy Ann Kelley died Friday, May 26, 2017 in Forney, Texas after a long battle with cancer. She was born February 19, 1930 outside of Dodge Center, Minnesota to Earl and Cora (Lynch) Buffington.

Dorothy graduated from Dodge Center High School in 1947 and soon worked at St. Mary's Hospital in Rochester, Minnesota. It was there that she encountered the Catholic Church and was so moved to seek instructions to become Catholic. She moved to Dallas and continued work in the medical field where she met Samuel Kelley. They married in 1954 and raised seven children in Dallas, Sunnyvale and eventually Forney before retiring to her home outside of Terrell. She had a love for animals from her childhood, particularly her Keeshond dogs and Arabian horses.