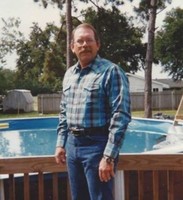 Donald Eugene Wright, Jr., "Don," 64 years old passed away on Monday, January 1, 2018 in the peace of his home in Terrell. Don was born on July 31, 1953 in Pineville, LA. to his parents, Donald Eugene Wright, Sr. and Quinnie Mae (Dunn) Wright. Don served with honor in the US Marines during the Vietnam Conflict. Don worked as a carpenter until his retiring.

He is preceded in his death by his parents, Donald Sr. and Quinnie Wright and by his brother, Robert Wayne Wright.

His family members who are cherishing the memories of Don's life are his children, Donald James Wright, Erin Nicole Wright, and Justin Daniel Wright and his wife Allison; grandchildren, Matthew, Cassidy, Apollo, Evan, and Catherine; his brothers, David Wright and Charles Wright; three sisters, Linda Vercher and her husband Tim, Billie Burloew and her husband Mike, and Cathy Wright; and numerous nieces, nephews, and other relatives.

No public service is planned at this time.

To order memorial trees or send flowers to the family in memory of Donald Wright, Jr., please visit our flower store.