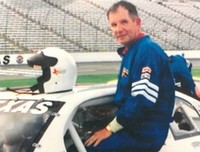 Dick was born August 30, 1944 in Morganton, North Carolina to Owen Edwards and Thelma Ragan Edwards. He married Candy Aldon in 1973 in Baltimore, Maryland. Dick was a dedicated General Motors employee for 35 years until his retirement in 2000. He was very proud of his nearly perfect attendance record for all of these years. An avid golfer, he was a long-standing member of the Marshall Lakeside Country Club, where he played every day and also served as the pro-shop manager. His most recent post-retirement adventure was serving as a crossing guard at Crosby Elementary in Forney. He cherished the kids, staff and families that he met during this time.

In his younger years, Dick loved going dancing with his wife, baseball, softball, and fast cars. He was passionate about General Motors vehicles and Nascar. In recent years, he attended the race annually with his daughter at the Texas Motor Speedway. Dick enjoyed collecting golfballs and license plates, watching his Grandkids succeed, and telling each of his daughters they were the prettiest.

Per his request, there will not be a service. In lieu of flowers, please donate to the charity of your choice and give your local crossing guard a high five.

To order memorial trees or send flowers to the family in memory of Dick Edwards, please visit our flower store.