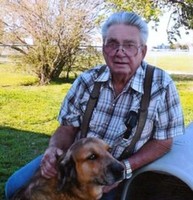 He grew up living and loving the simple country life of hunting, fishing and farming. Dennis played a major role in whitetail deer being brought into the area in the late 70's. Later becoming a Texas Deputy Game Warden along with his cousin Bud Dennis to protect and preserve the wildlife for future generations.

He worked as a bootmaker, years in the Aluminum industry, commercial farming, concession stands owner, arcade owner, vending route, cafe owner but his greatest passion was his cattle. He loved to work and be busy. His body did not contain a lazy bone. His entertainment came from hunting and fishing with family and friends.

A part of his heart laid in the San Juan Mountains in Colorado. Dennis was a strong man and a natural leader. A take the bull by the horns kind of man. He loved his family and friends.

Dennis was preceded in death by his parents; two brothers, Jack Hightower of Quinlan and W.A. Hightower of Cumby; and his loving wife, Mary Elizabeth Hightower of Terrell.

To order memorial trees or send flowers to the family in memory of Dennis Hightower, please visit our flower store.