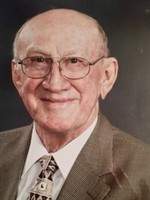 Edward (Dean) Craft, age 94, died Friday, at home, where living with his daughter and her husband in Siloam Springs, Arkansas. He was born April 2, 1923 near Elmo, Texas to James Houston and Sally Bette Nichols Craft.

Dean voluntarily joined the United States Navy when he was 17 years old, his mother had to sign for him since he was so young. He served as a Seaman 1st/Class and was on the U.S.S. Enterprise during World War II.

He married Milda (Louise) Hulsey on June 25, 1948. Dean worked for Humble Pipeline in Tomball, Texas. He then moved his family to Pauls Valley, Oklahoma in 1960 with Humble Refinery (now Exxon) until 1985 when he retired after 39 years and moved with his wife to Terrell, Texas. Dean lost his wife in 2005 and moved to live with his daughter and her husband in Siloam Springs, Arkansas in 2012.

Dean was a longstanding member of FBC Terrell, Texas, where he served as an usher. He was a loving, caring and faithful husband to his late wife, Louise and the best "daddy" to his daughter, Sharon. Dean loved and treated his son in-law like his own and loved his grandchildren and great-granddaughters "to the moon and back". He loved fishing, planting and tending a garden, working in the yard, sitting on the front porch or back porch to drink his coffee (lots of it), and fixing and building things.

He was preceded in death by his wife, Louise Craft; three infant sons; his parents; and all eleven siblings.

Oklahoma Cemetery
To order memorial trees or send flowers to the family in memory of Dean Craft, please visit our flower store.