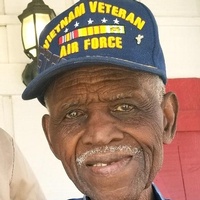 Clarence "Scotty" Scott Jr. was born Oct 8, 1929 in Alexandria, LA. He passed away Dec 28, 2018 in Royse City, TX. Scotty served in the United States Air Force for twenty years and experienced military life during the Korean Conflict and had a tour of duty in Vietnam. As a civil engineer in Vietnam, he operated heavy equipment and built runways for U.S. aircraft. Scotty retired as a SSgt with an honorable discharge and acquired numerous certificates for his exceptional military service. After retirement he worked in the Civil Service for twenty-three years, including several years at the Air Force Academy, Colorado Spring, CO.

Scotty played drums from his youth into his senior years. As a professional jazz drummer, he played with various bands including the famous Ink Spots. He was known by friends and family for his musical skills, personal charm, carefree laugh, and the "Scott" determination.

He made a profession of faith in Jesus as his Savior on July 13, 2003 and was baptized. He had a quiet faith but gave to several charities. He moved to East TX in his eighties and adjusted to the country pace. Scotty loved to drive his GMC truck, explore the countryside, and meet with friends at local restaurants. He always wore his veteran's cap and enjoyed the recognition and acknowledgement for his service.

As the patriarch of the Scott family, his presence and personality will be greatly missed.