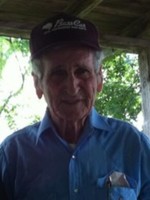 Billy Joe Luellen, 83, of Terrell passed away Tuesday January 12, 2016 at his residence. Funeral service is scheduled for 10:00am Friday, January 15, 2015 at the Goggans Funeral Home Chapel with Sr. Russell Hathcock officiating. Burial will follow at College Mound Cemetery under the direction of Goggans Funeral Home. A gathering of family and friends will be Thursday, January 14 from 6:00pm until 8:00pm at the funeral home. Pallbearers for the service will be Joshua Luellen, Joseph Luellen, Bruce Jones, Ryan Jones, Tim Stephens and Craig Stephens.

Billy Joe was born December 8, 1932 in Cass County to Henry Kurtis Luellen and Coy Lee Hamilton Luellen. He peoudly served his country in the United States Army. Later he worked at Garland Concrete as a large equipment operator. He married Marion Anneice Stephens on January 1, 1959 in Terrell.