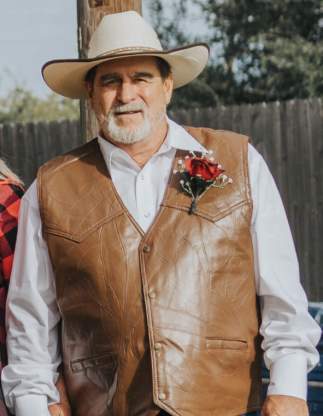 Dell lived his life in Terrell where he also attended school. He has worked at Commerce Grinding for more than 25 years. He was a member of Fellowship Baptist Church.  Among his hobbies was his love of racing. Most Saturday nights he could be found at the racetrack cheering on his favorite drivers and reliving his glory days as a driver. Dell was a great story teller and he could tell you the story in English, Spanish, or Sign never leaving out a single detail. He loved old reruns and the trivia that came from them. Dell’s greatest joy by far was his grandchildren. He could often be found teaching them to drive in the pasture, mowing with them on his lap, or slowly rocking the babies and whispering to them softly PawPaw loves you.  Dell prayed for a child and when he married the love of his life Carolyn he was honored with three. He leaves them to cherish his memory and live his legacy to love the Lord and family.

He is survived by his wife Carolyn, sons and their wives Michael, Steven and Tiffany, Dustin and Jennifer. The Grandbabies, Skylah, Peyton, Bubba, Tyler, Kat, Brooke, Ross, Cade, Macon, Coltin, and Sissy.  Sister Carol Ranes, brother in law and best friend Keith Ranes. Nieces and nephews, great nieces and nephews, Aunts, uncles, and many cousins who are just like siblings. And many friends that he considered family.

To order memorial trees or send flowers to the family in memory of Aubrey Gilliam JR, please visit our flower store.